The top of the wheel typically corresponds to the Paragon path, where your character makes selfless, cooperative decisions. The Paragon meter increases when your choices are noble, cooperative, or self-sacrificing. Paragons achieve their goals by doing the right thing in the right way.

The bottom of the wheel generally corresponds to the Renegade path, where your character is more aggressive and hostile. The Renegade meter increases when your choices are aggressive, selfish, or ruthless. Renegades achieve their goals by any means necessary. 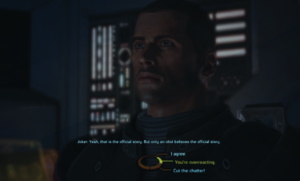 When you spend Talent Points on Charm and Intimidate talents, new options appear on the wheel's left that may help conversation outcomes later. Charm options appear in blue text. Intimidate options appear in red. Select your response to play it in a cinematic style. As soon as the conversation wheel appears, you can select your response. Your character speaks the line at the dramatically appropriate time. Also, you can interrupt or skip a line of dialogue by pressing X button.

During Character Creation, you must be aware that there are ideal choices depending on whether you prefer to play a “good” Paragon, or a “bad” Renegade.

Use the combinations identified here to dictate your background selection and gain the best possible bonuses for your new character:

In Mass Effect, you interact with a lot of NPCs, Companions or Bosses through dialogue. Such dialogues can be useful sources of information regarding what to do and what is currently going on as well as massive revelations that can shake the foundations of the game. In some dialogues, you can choose mostly between two choices. A good-hearted, cooperative, self-sacrificing choice, nets you Paragon points, while a selfish, evil and violent one rewards you with Renegade points.

These tables reflect the part of the dialogues where you can get either some Paragon or Renegade points during the main Missions of the game.