After whichever of the following endings, Commander Shepard gives a speech and then marches off to find a way to prevent the imminent Reaper invasion. Whoever you choose as humanity representative, gives a speech (Captain Anderson or Ambassador Udina), that differs depending on the alignment (Paragon or Renegade) or if the council is alive or not, about stopping the Reapers. 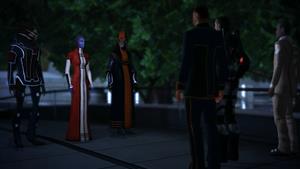 There is an extended scene where the three Council members thanks Commander Shepard for everything and begin to mourn the one who gave their lives for the cause. They feel they owe the Commander a great debt that they can't repay. The Asari Councilor says that the Alliance has shown that is has the strength and determination to stand alongside as  afull member of the Citadel Council.