Virmire is a Planet in Mass Effect. Virmire is located in the Hoc system within the Sentry Omega cluster. Planets can be explored while you traverse the galaxy, sometimes you can land on them and other times you only can survey them from the Normandy to obtain resources. Virmire is one of the major plot worlds, alongside Feros, Noveria and Therum.

Virmire is a lush frontier world, ideal for colonization by carbon-based species. Its vast seas and orbital position on the inner life zone have created a wide equatorial band of humid, tropical terrain. Unfortunately, the political instability of the nearby Terminus Systems has impeded colonization efforts - the high risk of raids by pirates and slavers makes it an unappealing homestead.

Virmire is a lush world located on the frontier of the Attican Traverse. Its vast seas and orbital position on the inner life zone have created a wide equatorial band of humid, tropical terrain. Only the political instability of the region has impeded efforts at colonization.

Many times, the Citadel has opened negotiations to settle Virmire with the various criminal gangs and petty dictatorships in the nearby Terminus Systems. All fell apart due to internal power shifts within the opposing parties. The Citadel has written off the colonization of Virmire as impossible without significant political change.

The Terminus powers themselves are unlikely to ever settle Virmire. Most lack the resources to support settlement of a virgin world, finding it more expedient to steal from their neighbors than build for themselves. 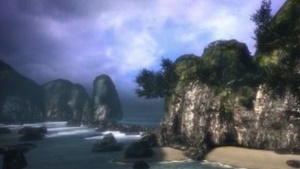