Ilos is a planet in Mass Effect. Ilos is located in the Refuge system within the Pangaea Expanse cluster. Planets can be explored while you traverse the galaxy, sometimes you can land on them and other times you only can survey them from the Normandy to obtain resources.

In the golden age of the Protheans, Ilos was a verdant world, dotted with the spires and arches of magnificent cities. Even casual observation shows this is no longer the case. Ilos has been devastated by means unknown, its entire surface changed to the color of rust. The atmosphere shows heightened levels of oxygen. Wildfires, presumably ignited by lightning strikes, can be seen burning on the dark side. This indicates that most - if not all - respirating animal life forms have died off. Surface gravity is a comfortable 1.17 standard G's.

Like the ancient human city of Troy, Ilos is a world known only through second-hand sources. References to Ilos have been found at several other Prothean ruins, though direct study of the world is unlikely to occur.

Ilos lies in a remote area of the Terminus Systems only accessible by the legendary Mu Relay. Four thousand years ago, the Mu Relay was knocked out of position by a supernova and lost. Since then, Ilos and its cluster have been inaccessible.

Occasionally, a university will organize an expedition to chart a route to Ilos using conventional FTL drive. These never get beyond the planning stages due to the distance and danger. The journey could take years or decades, passing through the hostile Terminus Systems and dozens of unexplored systems. 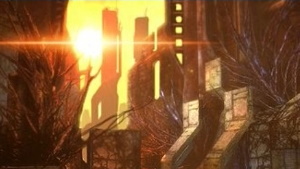